Whaling expanded to the deep sea—and the Shinnecock followed.

The men of many Shinnecock families participated in the whaling industry, including the Lees, Cuffees, Kellises, Walkers, Bunns, and others.

Below is a list of crew members who sailed on the Nathaniel S. Perkins from New London, CT in 1857, including Shinnecock whalers Charles Bunn and David Walker. At the time, New London was the third-largest whaling port in the country, and many Shinnecock whalers sought employment there after getting their start on Long Island ships.
​​ 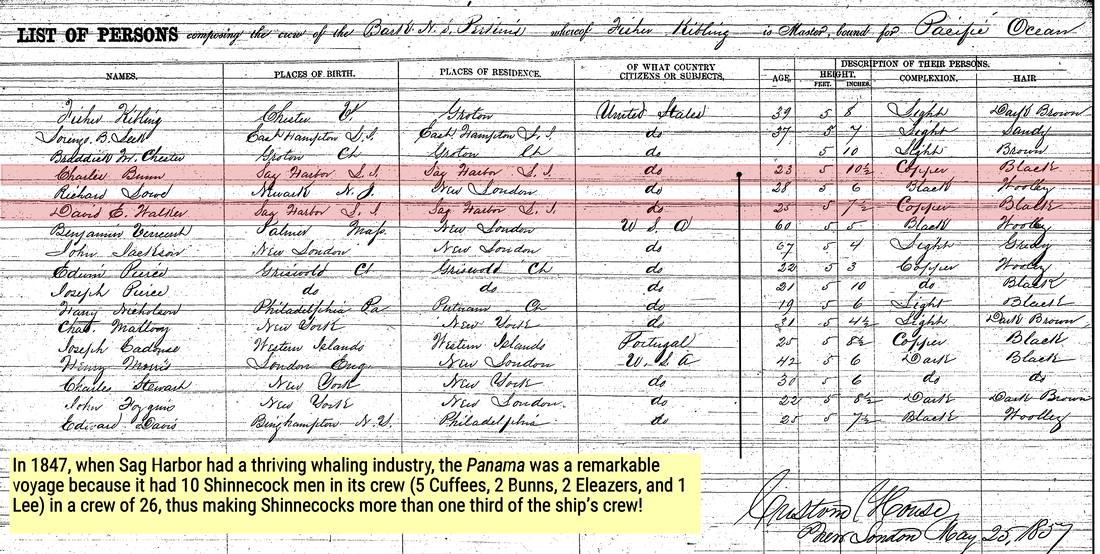 ​​Rising Through the Ranks

The Shinnecock, along with other Native Americans in the whaling industry in the 1840s and later, rose in the ranks to become third, second, and even first mates. They exhibited a commitment to whaling as a profession and the skills required of those in command: literacy, the ability to make complex navigational calculations, and crew management. They were rewarded for their professionalism with positions of authority, which meant also a higher rate of pay, enough to secure a comfortable living.
The Shinnecock, along with other Native Americans, generally thrived in the whaling industry—but only up to a point. Many became officers, but few became captains or investors. Less than five native men reached whaling master.

A devastating tragedy to the Shinnecock, whose effects were felt for years in the community.

In December 1876, the freight ship Circassian wrecked off the coast of Bridgehampton. The 16-man crew was taken off safely as the storm subsided. A group of Shinnecock men were then hired to retrieve the cargo. The Shinnecock rowed out to the stranded ship, proceeded to load cargo into small boats, and waited there for the next small boat.

In the middle of this operation, a new ice storm brewed. Rather than have the men brought in immediately, they were left to make one more load of cargo. Unfortunately, the ship dramatically broke apart and the men were cast into the freezing water. The ten Shinnecock men were among the thirty-two who perished.

More than half of the Shinnecock men were veteran whalers who likely sensed the destructive nature of the storm. Some Shinnecock tribal members maintain that the men were threatened and forced to complete off-loading materials even with the approaching storm. Only one Shinnecock man got off the ship in time.

The loss of these men among the 175 people on the reservation was a demoralizing blow. The Circassian widows and the twenty-five children from their families struggled to support themselves.
News accounts at the time incorrectly marked the “end of the tribe”: